Our annual prize giving evening was held at Lenzie Rugby Club on the evening of March 13th. As has become customary, John Sackey, was MC for the evening, and chaired proceedings. 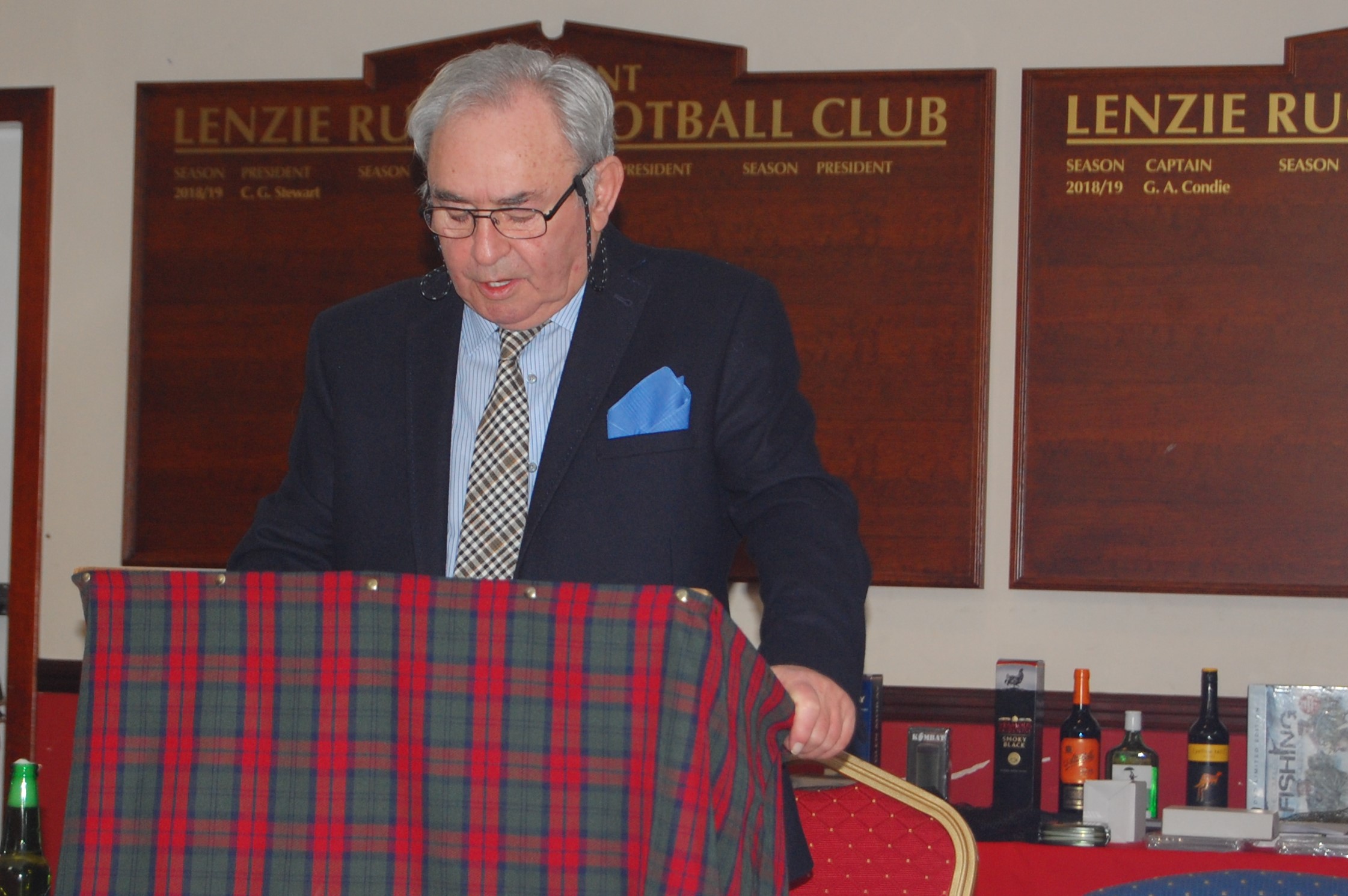 First of all, a special award was made in recognition of the many, many years of service given by Iain Black to the office of club membership secretary. Here he is with the Kirk Trophy, and his long suffering wife. 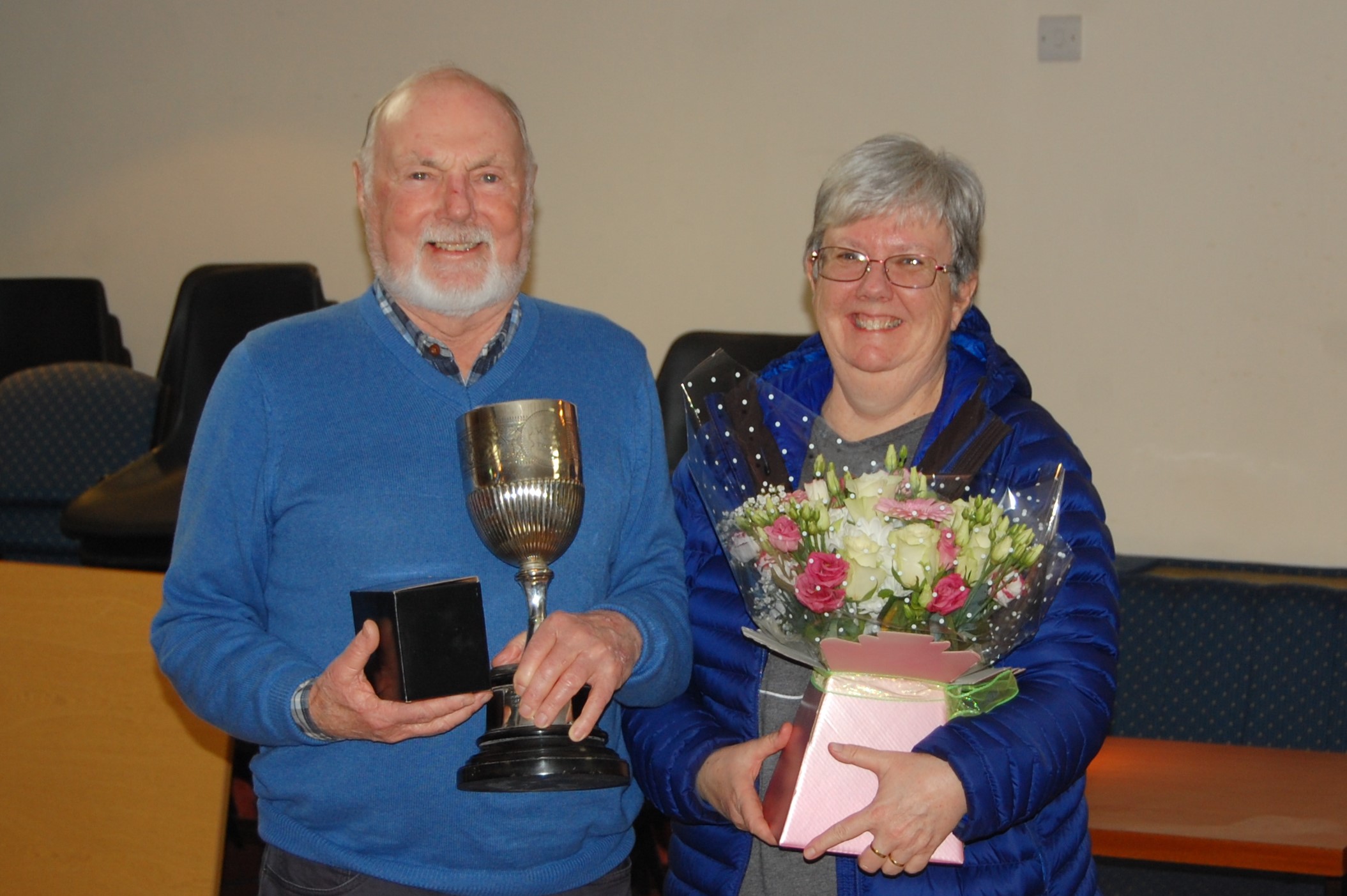 Professor Michael Roy was genuinely thrilled to be asked to award this year’s prizes on behalf of the Committee: he looks happier (and considerably more glaikit) than most of the prize recipients, with some honourable exceptions.

The first award  – the Cafaro Trophy – was presented to Mark Anderson for landing the heaviest fish in a competition – 2lb 4oz. 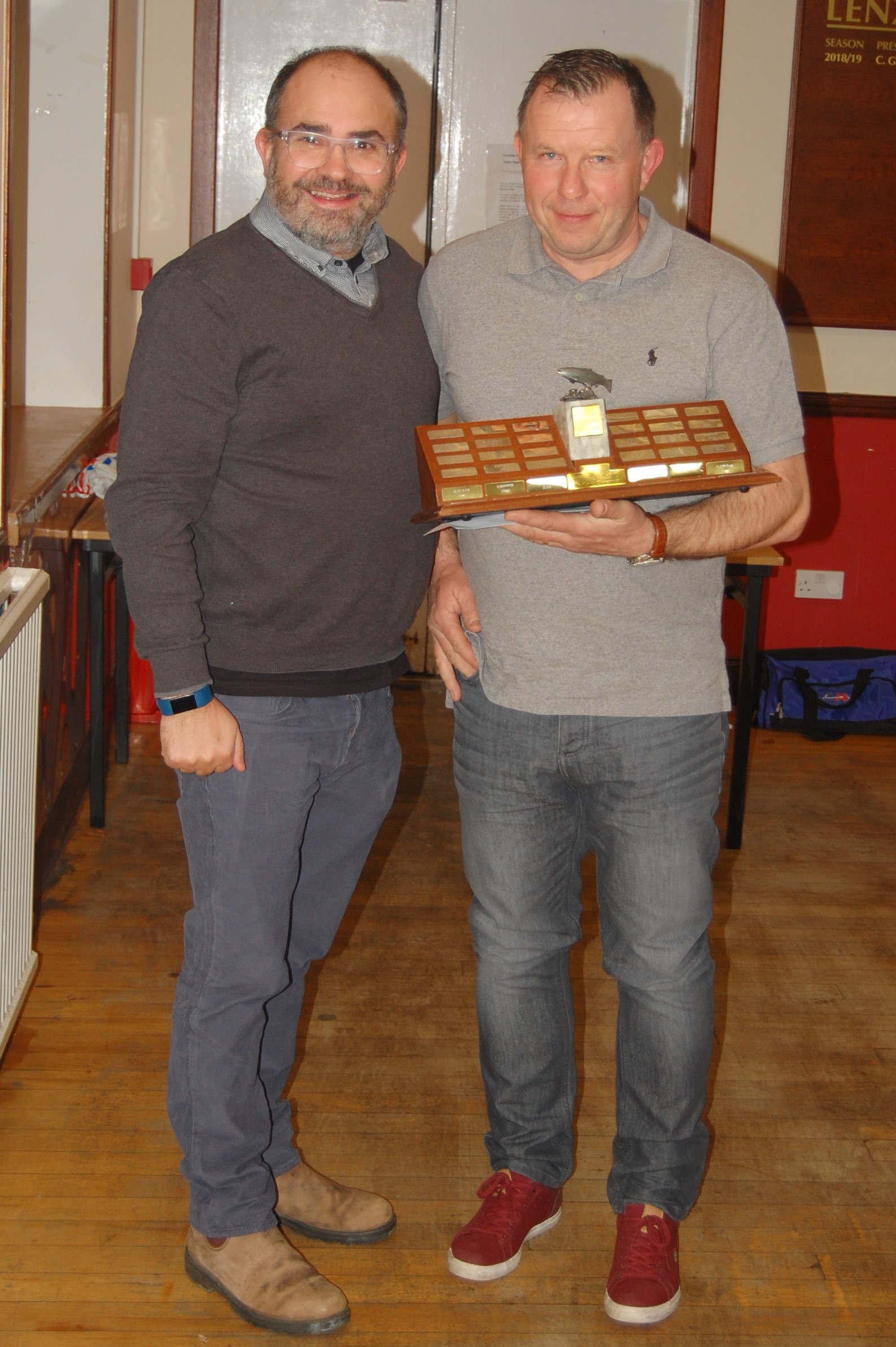 Club President Jim Twaddle was awarded the Doo Cup, which was held at Woodburn in 2018. This was to be the first of many trophies presented to Jim this evening. 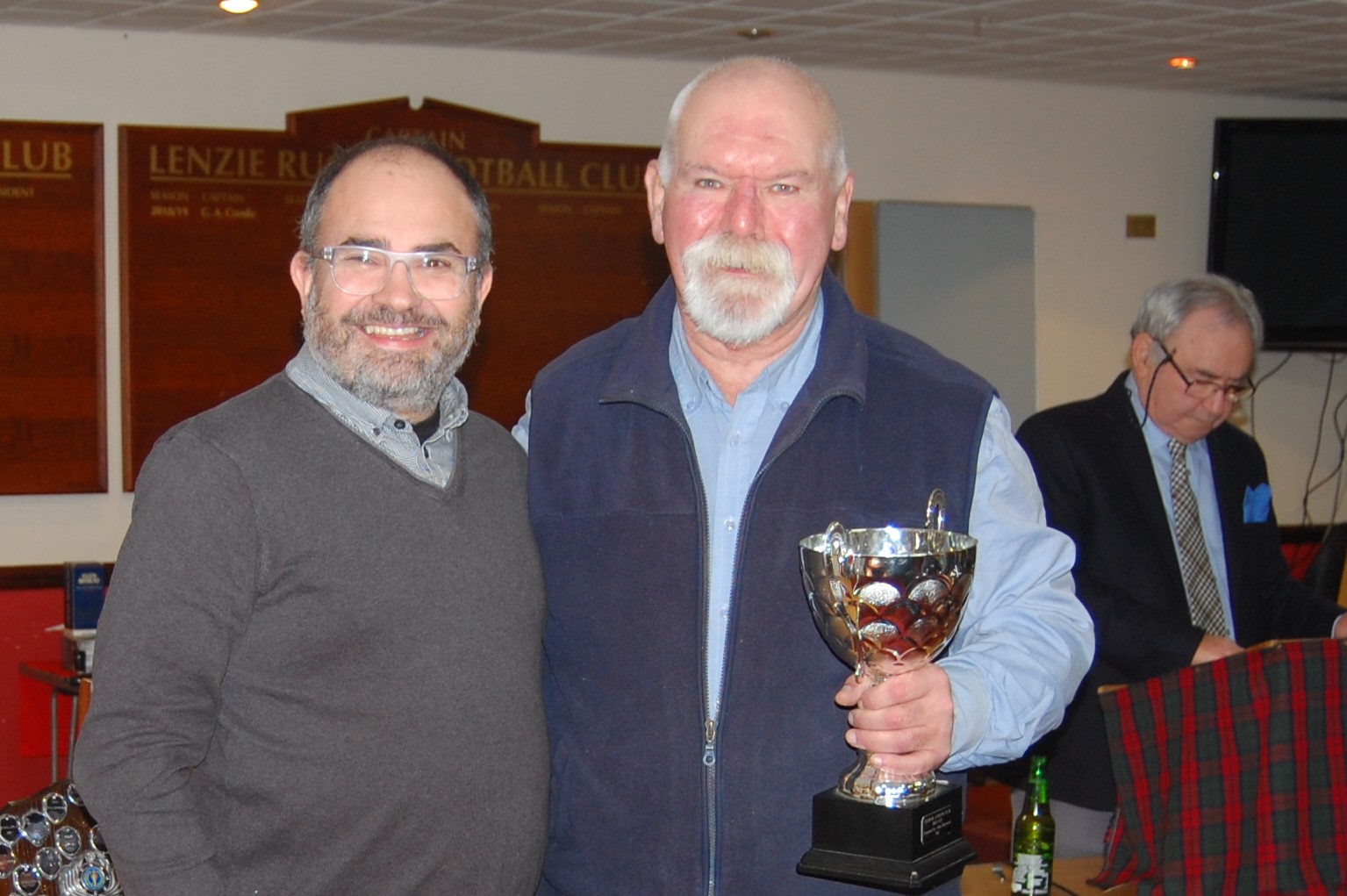 Mark Anderson was up again, this time being awarded the Last Cast Quaich 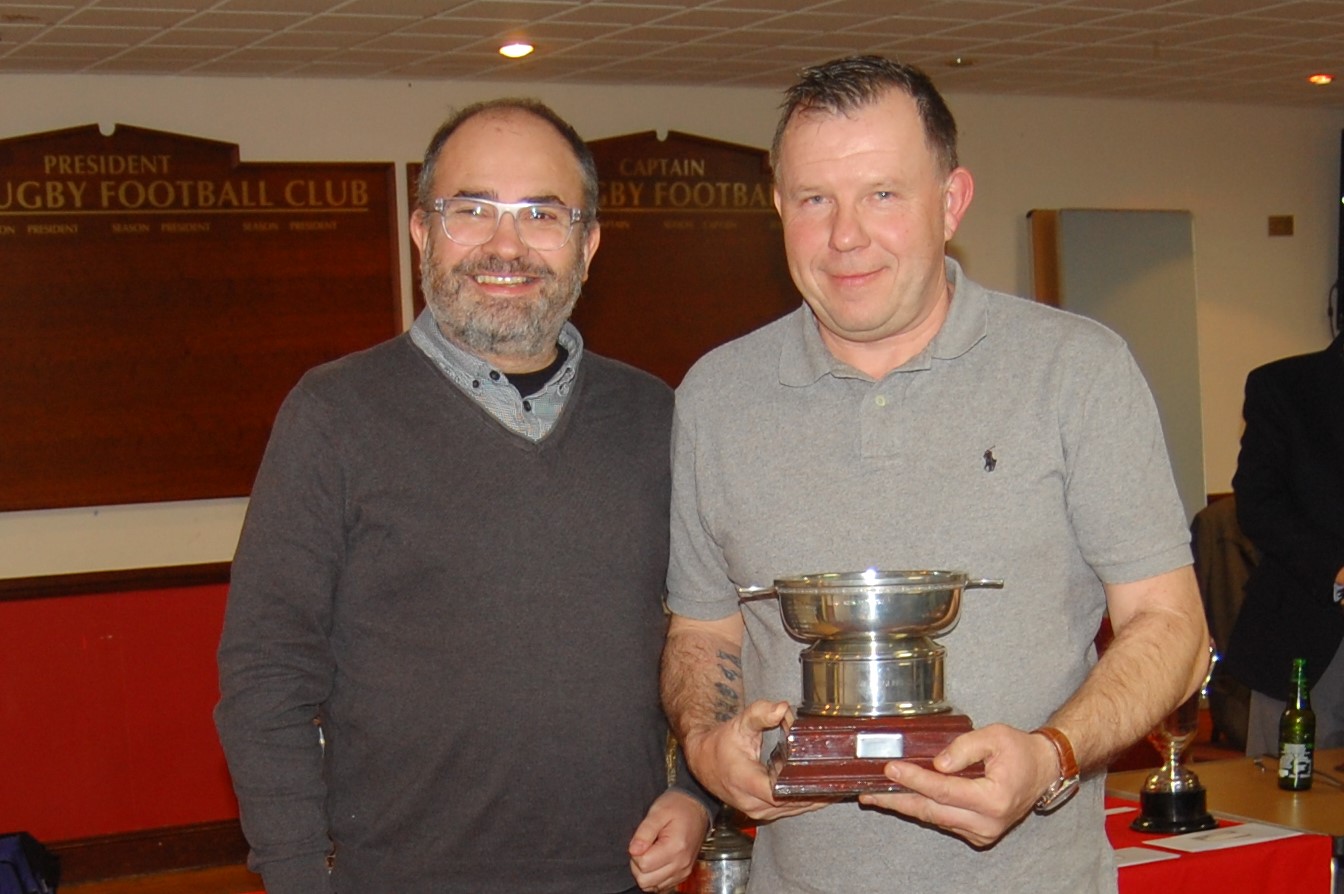 The Junior Cup, meanwhile, was presented to Max Small and Oliver McKenna. Oliver is here on the right collecting the trophy while inexplicably being photobombed by our MC. Max could not attend on the evening due to commitments with exams. Michael has almost reached peak glaikit by this point. 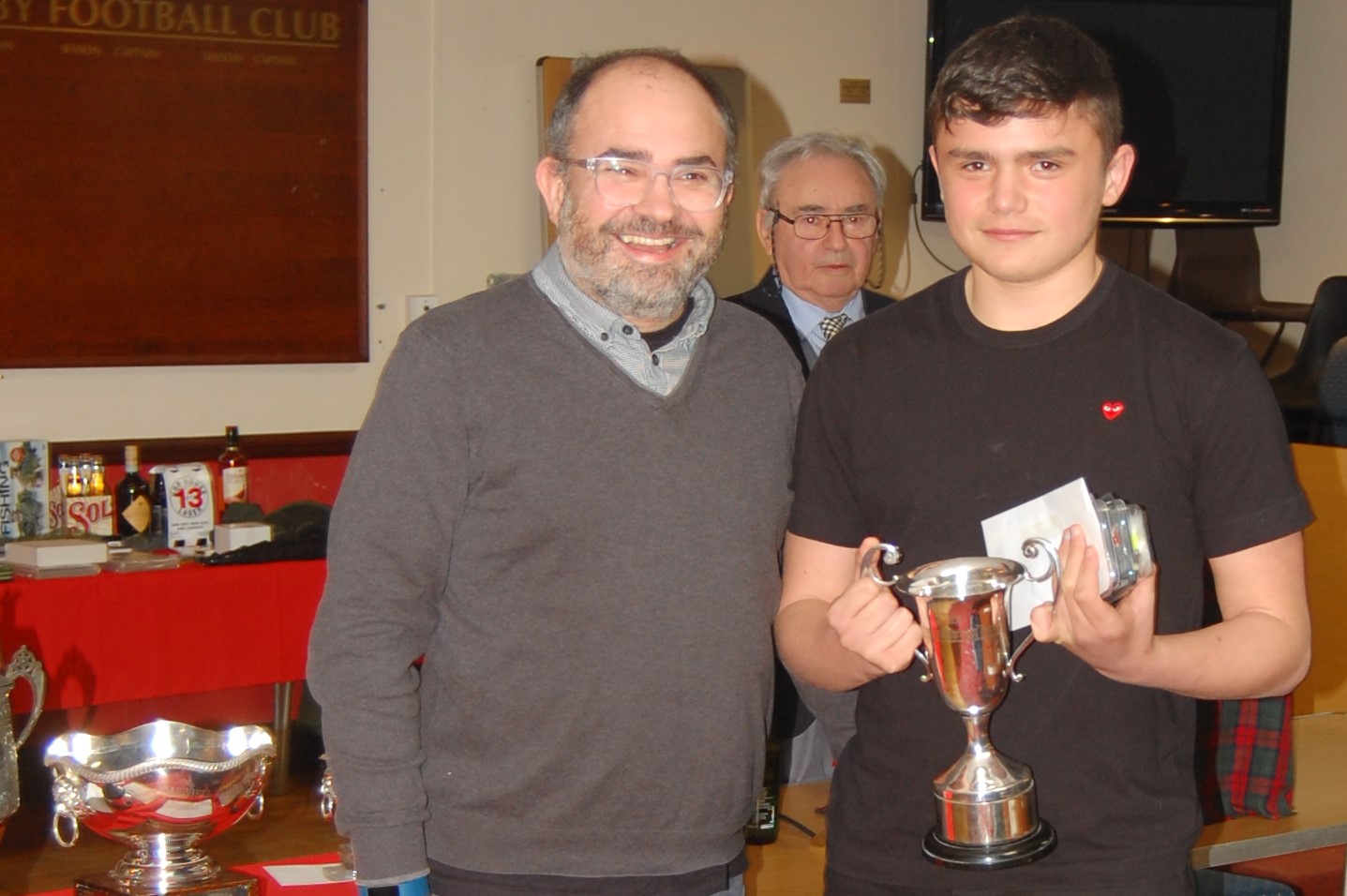 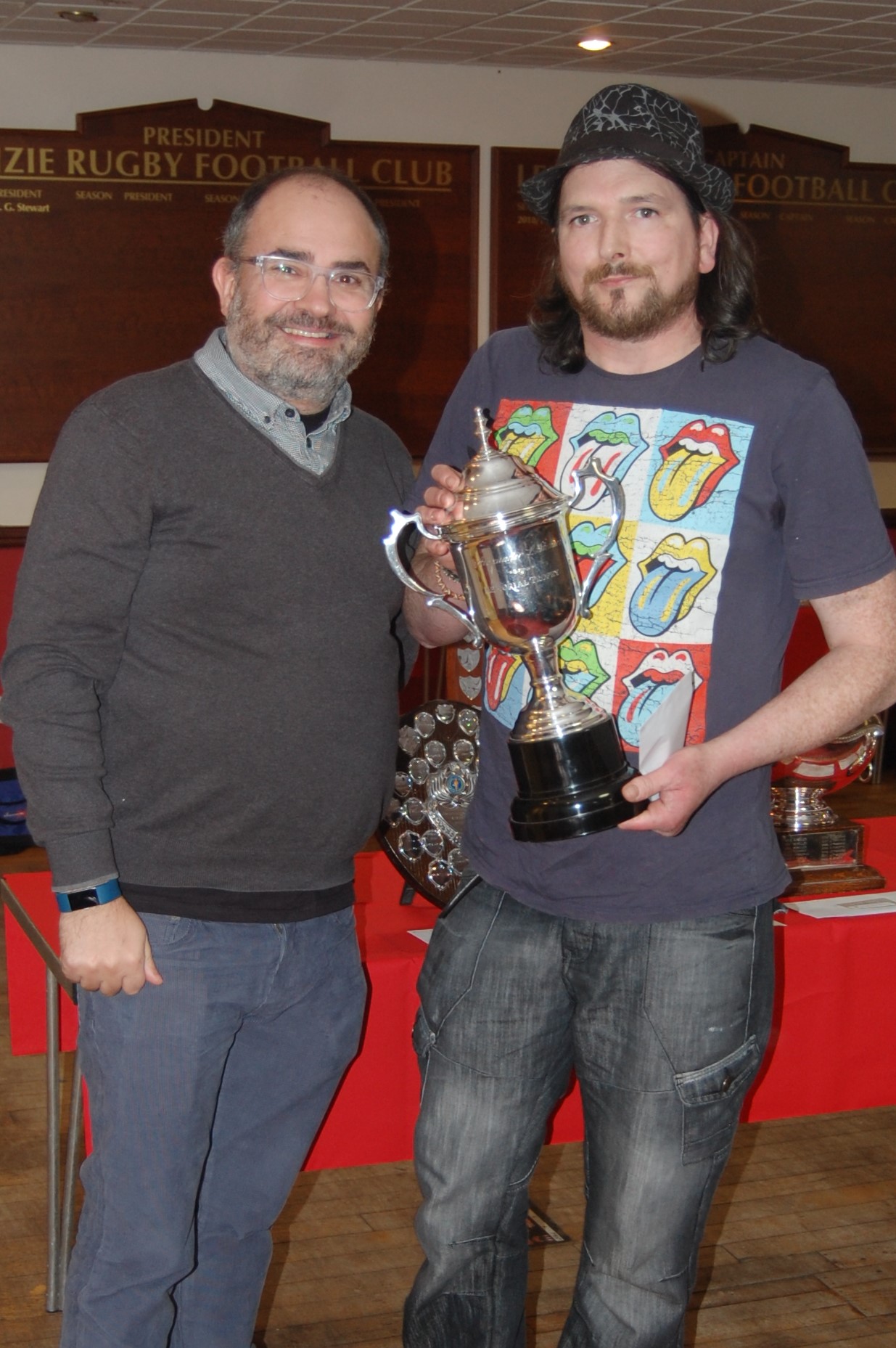 And Mark Anderson was swiftly up again to collect his third trophy of the evening: the Brown Shield. They must be sharing a private joke, while John Sackey looks on in disgust. 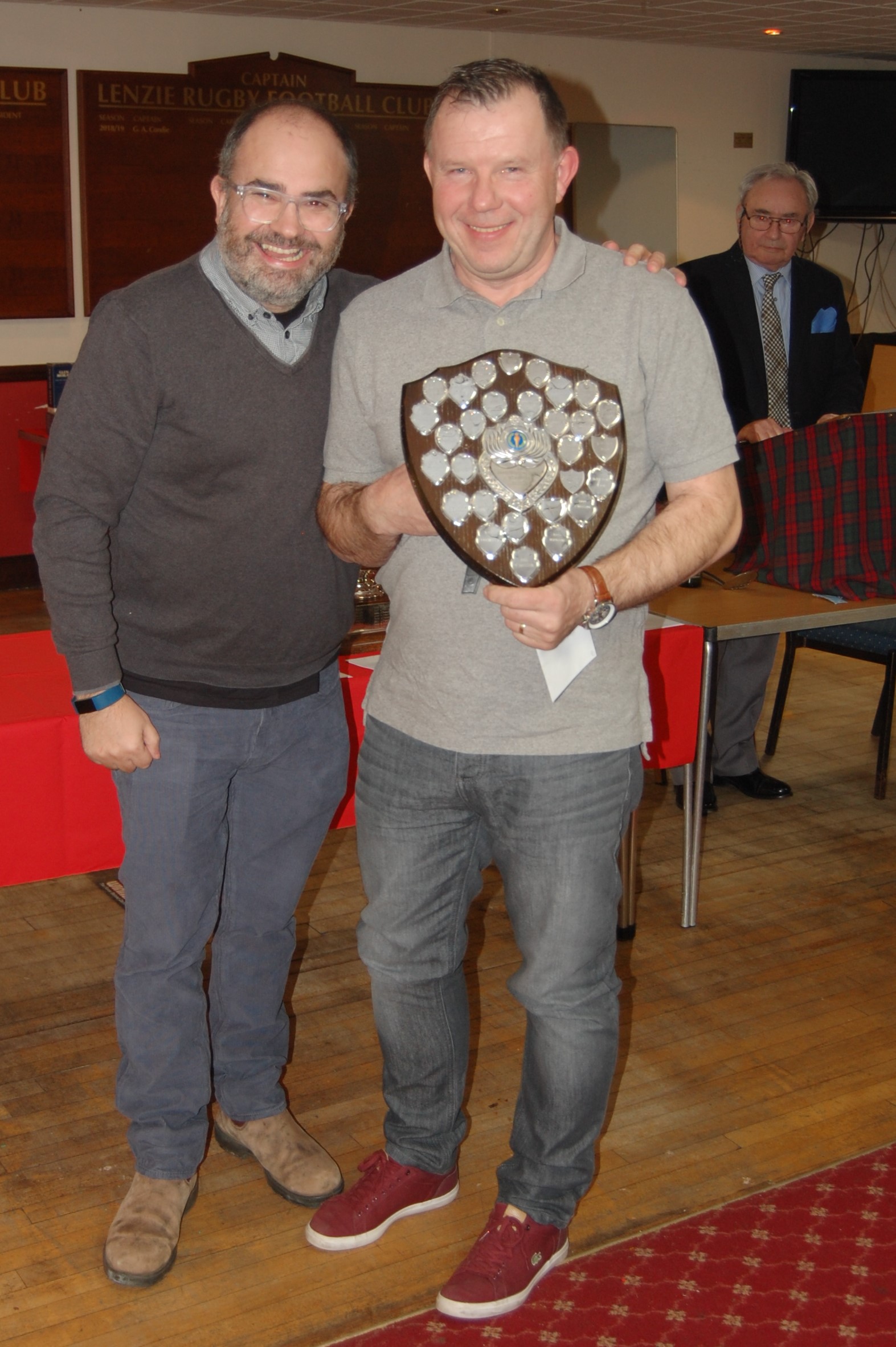 Not keen on being outdone by his cousin Mark for long, Peter Tanner was then presented with the Jewett Cup. 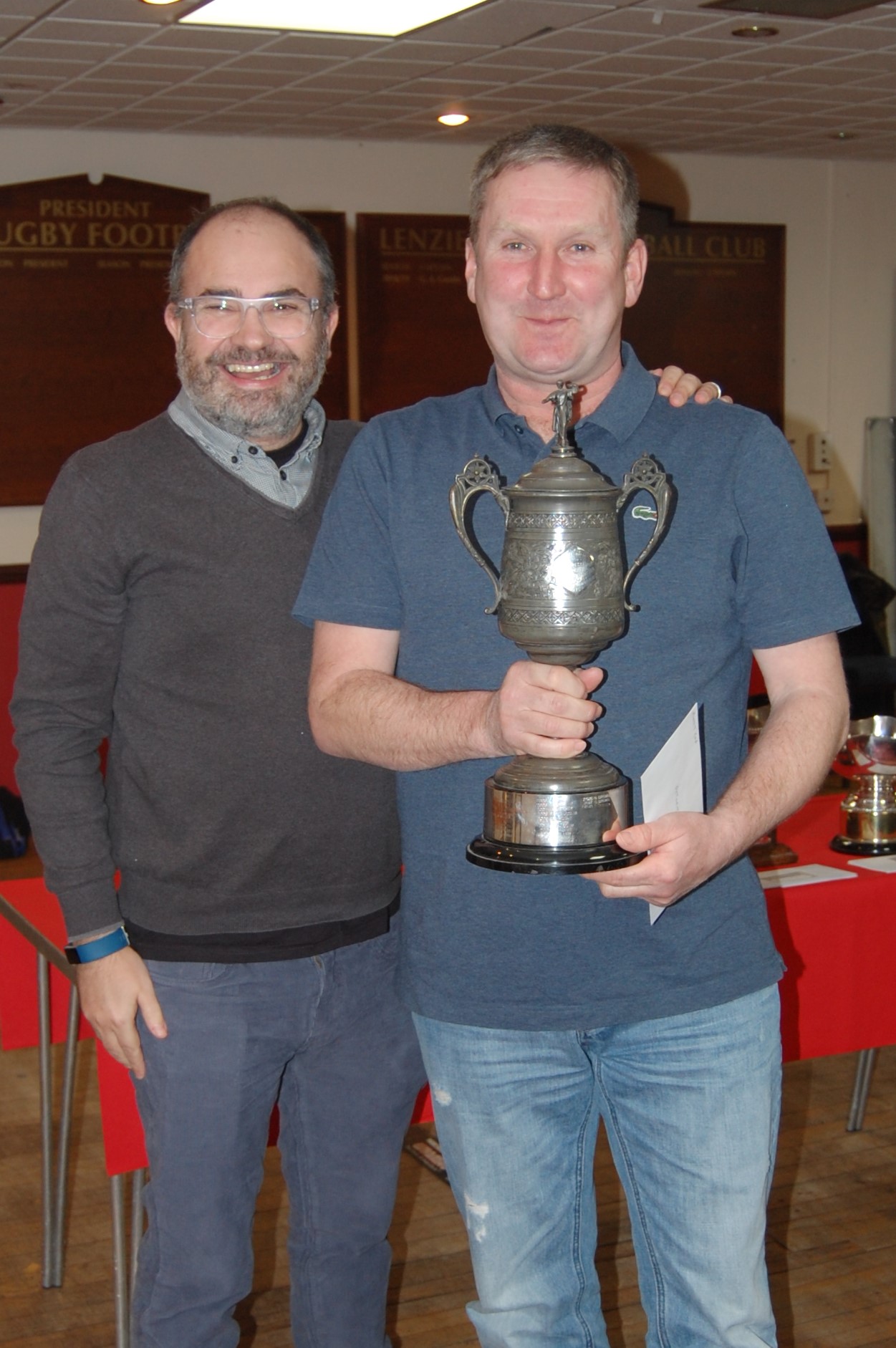 And then normal service was resumed with the award of the Summer Cup to Jim Twaddle. Michael’s grin is almost starting to fade by this point. He must be getting tired. 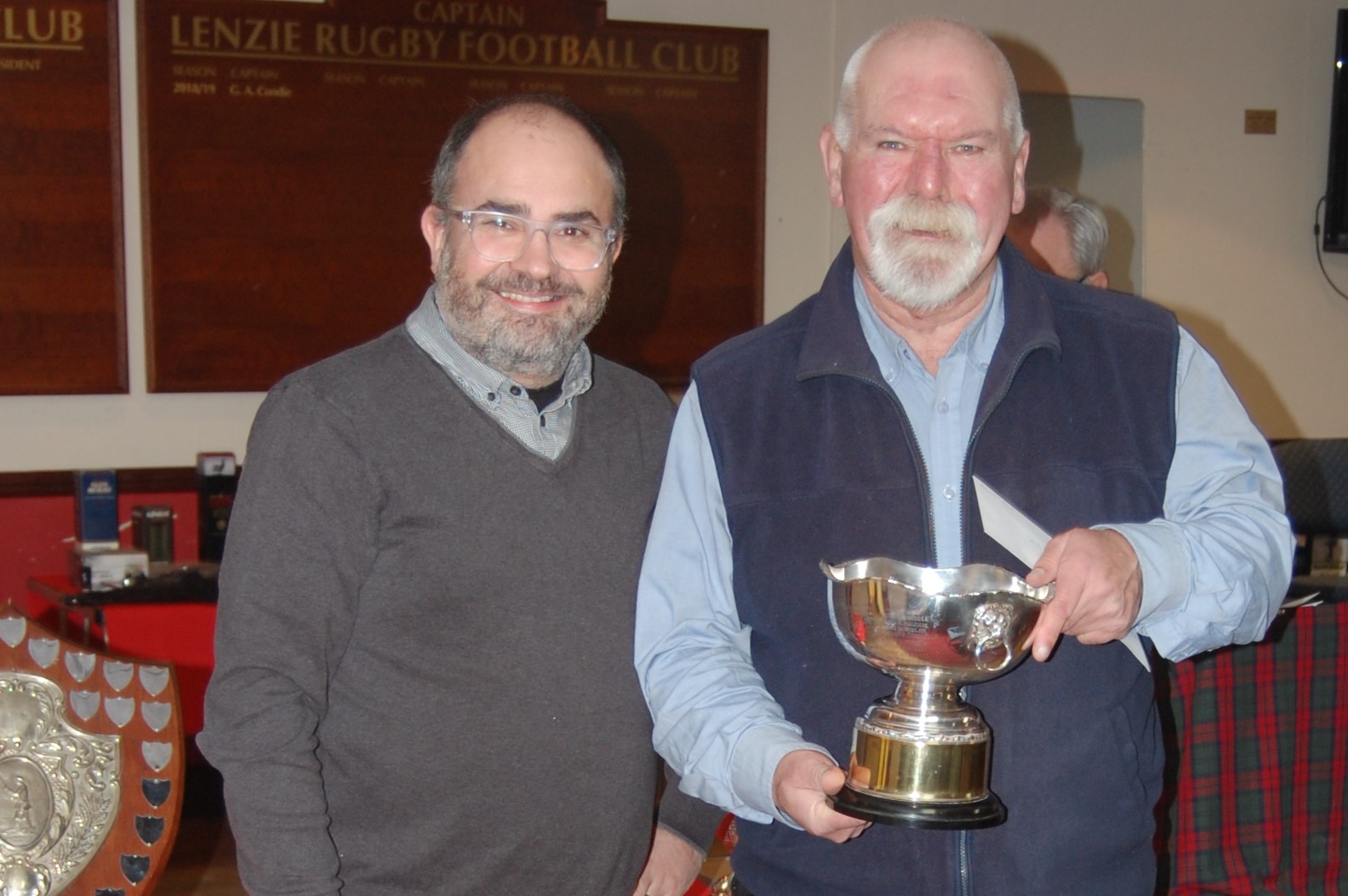 James Wallace was the worthy winner of the Autumn Cup. Again, John Sackey creeps into the background of the photos. 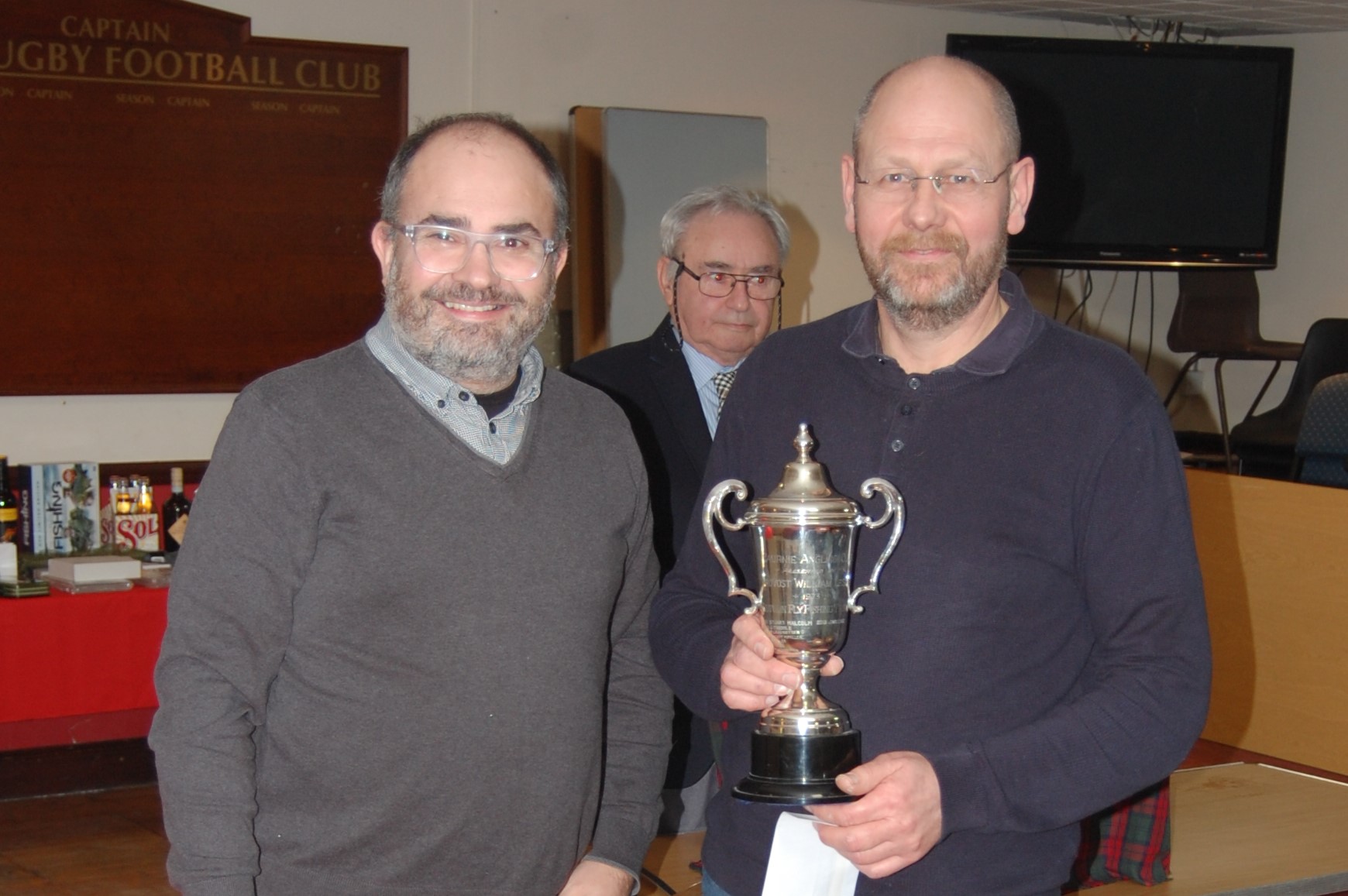 …before the ultimate prize is awarded: Club Champion for 2018 to Jim Twaddle, narrowly beating David McGhee and Mark Anderson. 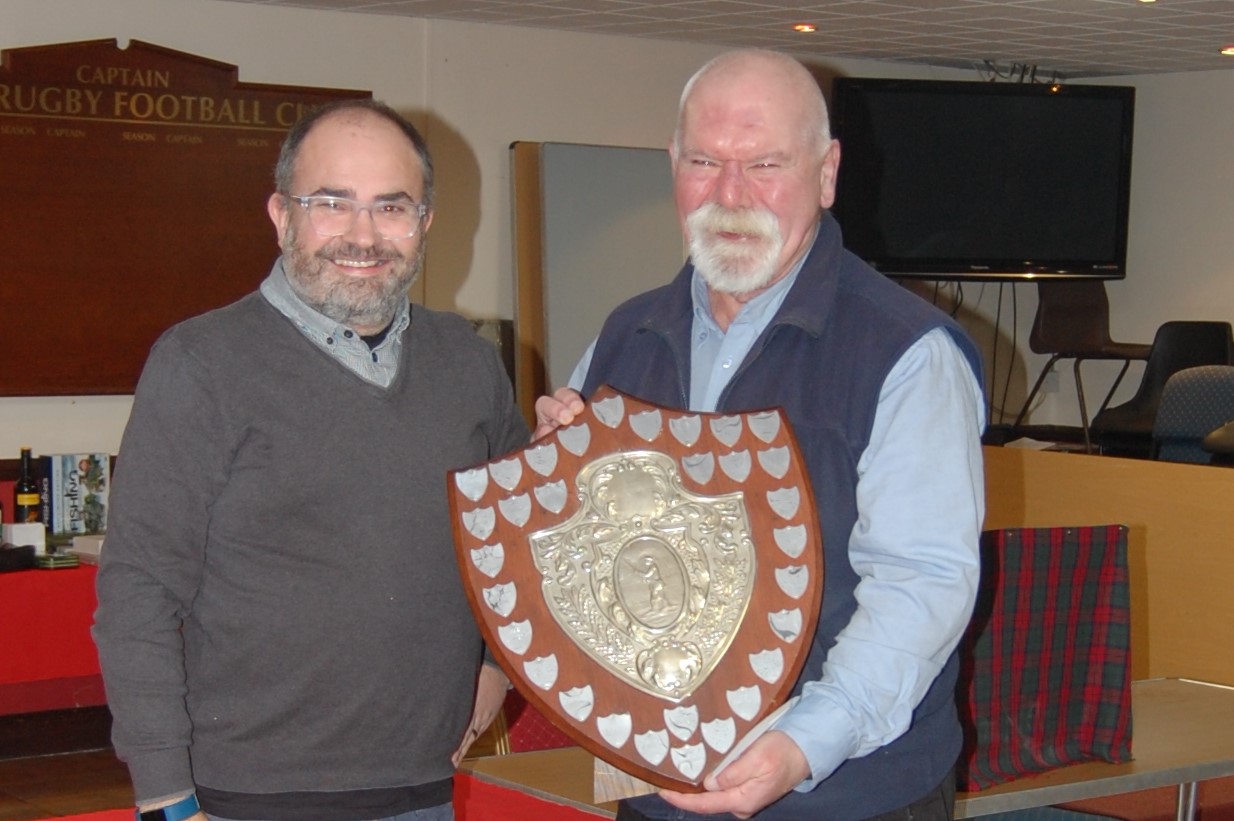 As is now traditional at our prizegiving, Graham’s quiz was then held. This time there was remarkably little controversy, very few arrests were made and when the dust was settled and broken bones set, it turned out (quite inexplicably) that Club Secretary Roger Hughes had won. Here he is being awarded a fine bottle of whisky for his considerable efforts. 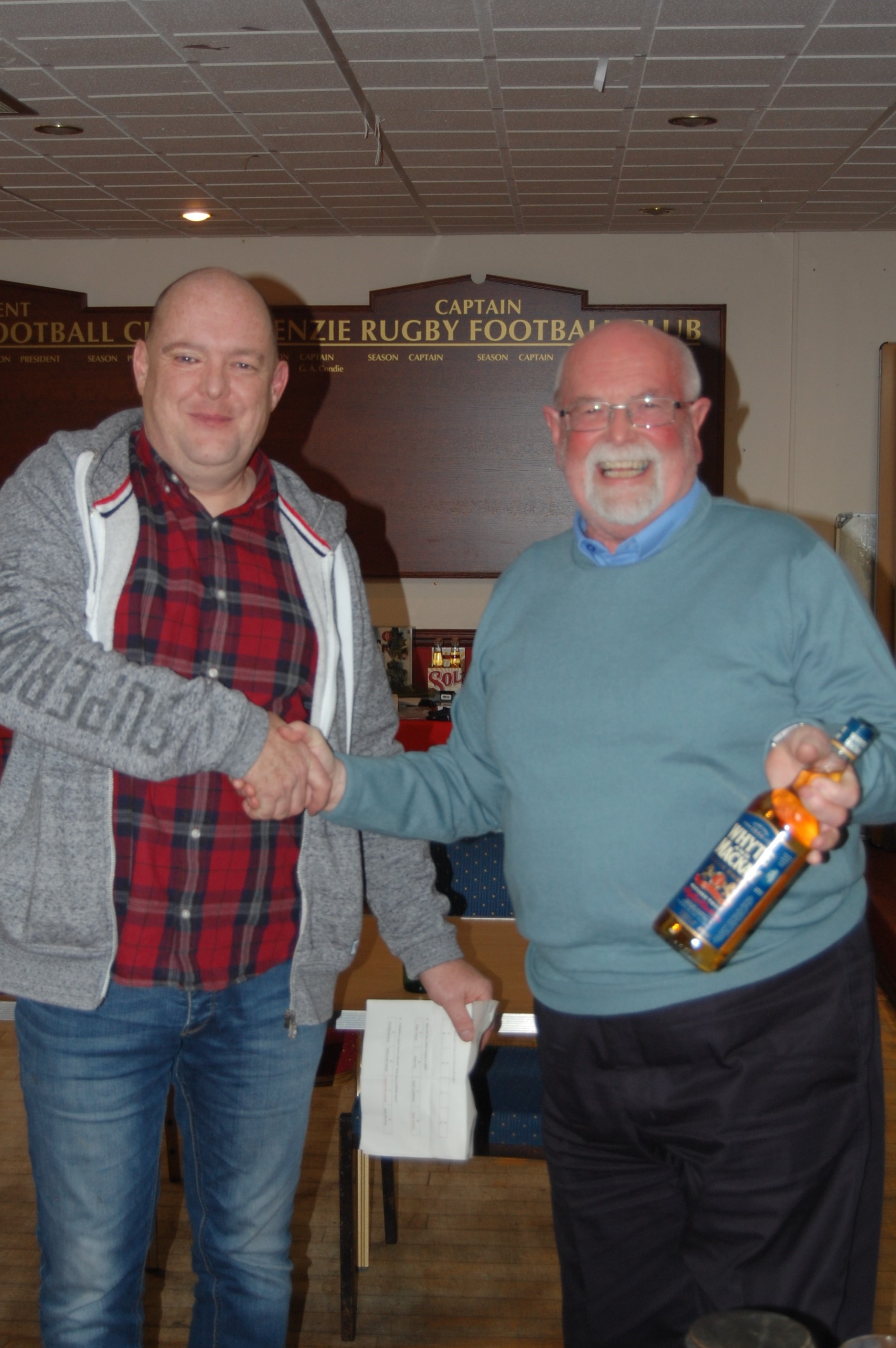 As is even more traditional, the beer, hot pies and pakora were soon flowing, to round off and celebrate another year, and to bring in the new trout season with good cheer in the company of friends. Here’s to a successful 2019. Tight lines everyone!